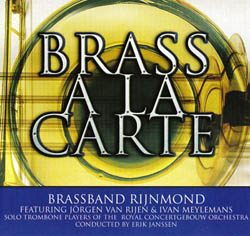 A CD with two well-known soloists: Jurgen van Rijen and Ivan Meylemans are trombonists who are internationally renowned. They shine in the work "Rainforst Concerto" by Saskia Apon. They perform this work, which describes the destruction of the rainforest, in impressive manner. The individual solos of both gentlemen are also played excellently and spark your imagination.With superior sound and technique, these soloists are the jewel of the CD.
Brassband Rijnmond also played a number of Brassband works in which the beautiful overall sound of the band is fully displayed. A CD that should not be missing in your collection.